When there’s barely a glimmer of hope, communication can restore the brilliance.

When a skills development and job creation project with international stakeholders almost ran aground, DevCom proved the power of communication in averting a crisis.

The Limpopo Jewellery Cluster (LJC) project was conceived to empower historically disadvantaged individuals with the skills to establish their own jewellery businesses, while also supporting sustainable mineral beneficiation through large-scale production.

The project received R7 million in funding from the European Union (EU) in 2008, and R3 million from a local funder. It was given 18 months to establish itself in Polokwane and produce the first year’s financials. By February 2009, the project was on the brink of disaster. It was running a year behind schedule and an empty building in Polokwane was all it had to show after a year of project implementation. The local co-founder had withdrawn, and the EU was seriously considering shutting down the project.

This posed huge reputational risks for all parties involved, especially for Vukani-Ubuntu, the lead consortium. In addition, the directors of Vukani-Ubuntu faced serious consequences as they would have had to take financial responsibility for the project. Furthermore, the lack of project delivery had created political pressure points in the community in the run-up to the April 2009 national elections. Local politicians were using the project’s vulnerability to score political points.

Internally, the project team was fragmented and not focused on delivery. Each team member had a different idea, and power struggles made progress impossible. There was also no formal communication with the local stakeholders, partly because the project offices were in Pretoria and the project itself in Polokwane.

DevCom stepped in in March 2009 when Vukani-Ubuntu appointed our CEO, Mari Lee, as project manager. She had 16 weeks to renovate the premises, procure the equipment, recruit staff and beneficiaries, and establish all the technical and operational activities that the centre needed to function. Crucially, she had to bring all stakeholders back on board and rekindle their belief in the LJC.

The communication goal was to avert a crisis and manage the reputational risk. In terms of hard project goals, the LJC had to pass the final funder evaluation in July 2009 – its survival depended on this – and be viable and ready to be handed over to a local management team by May 2010.

Mari’s first step was to get to grips with the situation. She spoke to stakeholders and worked through reports, contracts, and correspondence, to produce a SWOT analysis and goal sheet. She had one-on-one briefings with every funder, project partner, and team member, helping them to understand and embrace the bigger picture and their roles in it.

Project staff communication was a priority. Mari created a series of posters explaining the LJC’s goals, procurement, and other processes, and each team member’s role. These posters were laminated and put up next to people’s desks and on noticeboards. Staff were encouraged to have fun with the noticeboards by adding their own notes and pictures of their families.

The team received feedback at weekly status meetings, which were also used as opportunities for team building and destressing. For instance, a weekly staff meal was introduced, and each staff member had two turns during the 16-week project period to provide lunch that showcased his or her culture.

The consortium team, key funders, and other partners received an update every Friday to inform them of the week’s progress, and to highlight areas of concern where Mari needed their assistance.

“Mari Lee turned one of our projects around and completed it successfully, thanks to her industry, capability and – in no small way – her personality. Her considerable management and communication experience had a hugely beneficial effect on the project in a very short space of time. Her leadership and team-building skills are exemplary, as is her ability to identify priorities, to set down a work programme, and to carry it through in spite of competing interests,” said David Wood, team leader, Limpopo-led programme (seconded to South Africa by the EU).

Spending the project funding, on time, correctly and in a way that lay the foundation for future sustainability was slightly less challenging than having to implement an 18-month project in 16 weeks. The geographical disconnect between the funders, the project office, and the project location was a challenge that had to be carefully managed. Balancing the procurement between what was available in Polokwane and what had to be brought in through national and international suppliers was a sensitive issue due to the politically charged time. People questioned every single item not procured from the local community. The local Chamber of Commerce and media assisted Mari greatly in communicating the nuances to the relevant stakeholders through weekly face-to-face meetings or telephonic discussions with five business and media opinion leaders in Polokwane. Recruiting the right people to run the project in Polokwane was not easy. Mari had to find skilled entrepreneurs who met Black Economic Empowerment (BEE) requirements and supported the developmental goals and spirit of the project.

The power of passionate and professional communication, underpinned by excellent project management skills and boundless energy, won the day. At the end of the 16-week implementation period, two independent EU project evaluations and two external financial audits gave the LJC a clean bill of health. All the project goals had been met. The first pieces of jewellery produced by the emerging entrepreneurs were showcased at the project launch event on 10 July 2009. The final reports were submitted to the EU and the 20% final payment, which depended on proof of successful implementation, was received in August 2009. Communication emerged as a key strength of the project in all evaluations and in the reference letter from the EU project manager. The LJC went on to receive an award at the 2010 African Incubation Conference for its contribution to local economic development and received positive local and international media coverage. The project was handed over to local management in May 2010. 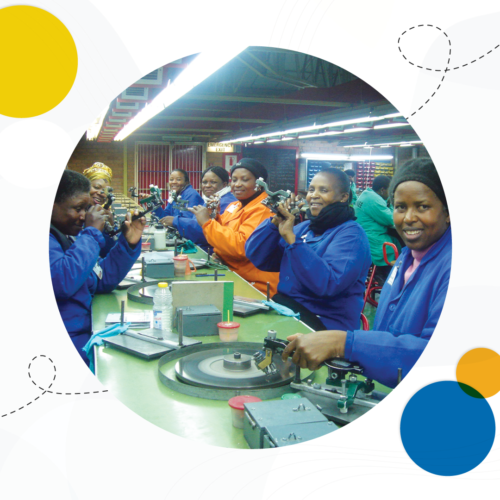