Never assume you know what the issue is. This was a valuable lesson we learned when we helped an international organisation to understand why its impressive skills development successes failed to speak for themselves.

The Swiss-South African Cooperation Initiative (SSACI) is an agency that facilitates skills development among young people between the ages of 18 and 26. It is sponsored by the Swiss government and Swiss corporations doing business in South Africa.

SSACI partners with NGOs and NPOs to enhance existing projects and/or start new ones. Its model is output- and goal-driven and it measures its results.

By the time SSACI contracted DevCom, the agency had created more than 1,100 new jobs, placed 2,800 of its over 3,000 skills development graduates in skilled employment, started more than 350 micro enterprises, and provided business advice to more than 450 existing businesses.

What’s more, it had contributed to the development of new courses and qualifications in agriculture, early childhood development (ECD), contact centres, and construction; developed government programmes in business development support (BDS) and human resources for the rural health system; and conducted important research in vocational skills training and the support required by emerging young entrepreneurs.

Why, then, was SSACI finding it almost impossible to get access to government officials to secure their buy-in? And why was it struggling to secure new corporate sponsorships to continue making an impact?

The organisation’s leadership thought that the stumbling blocks were the result of the “Swissness” of SSACI’s name, its goal-driven approach, as well as resentment towards a “foreign” organisation that was achieving more than local authorities.

They also thought that government was not interested in working with them, given the numerous unsuccessful attempts to meet with the Joint Initiative for Priority Skills Acquisition (JIPSA) and other government agencies and departments.

Rather than helping SSACI to change its name, DevCom researched the root of the disconnect.

Our communication audit revealed that SSACI’s traditional preference for keeping a low profile resulted in almost no brand awareness among its key audiences. For example, 100% of government officials that were cold-called did not know who SSACI was. We also discovered that the Swiss brand held power but that the logo and its visual application did not communicate SSACI’s message.

Internally, integrated mechanisms for communication, team support, and administration processes to support communication and upward flow of messages emerged as areas of concern. Team members trusted each other but felt overwhelmed. What’s more, a lack of tools to communicate with top management impacted on SSACI’s external communication effectiveness.

Our research identified the Departments of Labour, Education, and Trade and Investment, along with the 23 Sector Education and Training Authorities (SETAs), funders, and past beneficiaries as the primary external stakeholders. SSACI knew this but did not know how to communicate with these audiences consistently and strategically.

Finally, the research helped us to clarify messaging. For instance, given government’s aversion to risk, it was imperative to emphasise SSACI’s track record for achieving success and delivering results. Based on the research results, DevCom worked with SSACI to develop and implement a comprehensive communication strategy.

Implementation started with a revamp of the SSACI brand. We updated the corporate identity and visual language, introduced a brand manual, and developed a tagline – “Development support” – that spelled out SSACI’s objectives.

Our big implementation idea, however, was the first cartoon map DevCom ever created (since then, cartoon maps have become one of our most trusted and successful tools). The SSACI Skills Development Map illustrated the SSACI process, starting with desperate, unemployed individuals and ending with skilled, employed people who can provide for their families.

The cartoon map was adapted into posters that were put up in government departments, handouts for conferences and meetings, a screensaver that stakeholders could upload on their computers, and an electronic jigsaw puzzle.

Other communication tools included media kit CDs that contained written information, voice clips, and pictures; “Meet SSACI” CDs with an introductory PowerPoint presentation, photos, and the cartoon map; and a monthly electronic newsletter. We also included target market messaging for occasions like Youth Day, Women’s Day, and Children’s Day, and a breakfast seminar to introduce the SSACI chairperson to stakeholders.

Following the six-month implementation period, DevCom conducted a mini-audit to determine the impact of the communication strategy. Our evaluation revisited the individuals who were part of the original audit and included 30 new government officials. The results showed that the general awareness of SSACI increased from 39% to 61%.

Most gratifyingly, through a contact in National Treasury, SSACI was introduced to officials in 10 government departments, resulting in the establishment of two new partnerships. Four new potential funders also expressed an interest in pursuing a relationship with SSACI. 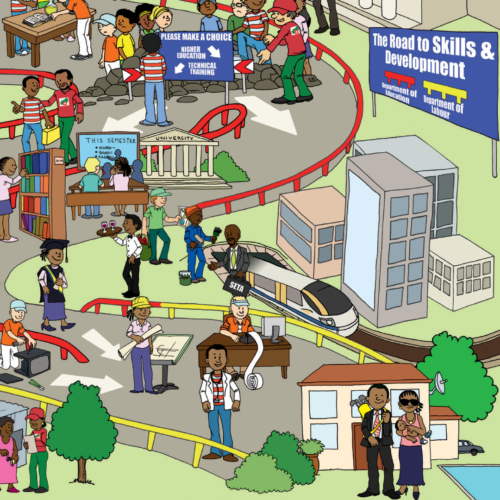